Has your local endorsed the ESP Bill of Rights? be the next Local to do so. 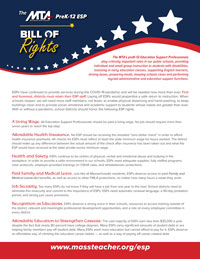 A Living Wage. All Education Support Professionals should be paid a living wage. No job should require more than seven years to reach the top step.

Affordable Health Insurance. No ESP should be receiving the dreaded “zero-dollar check” in order to afford health insurance premiums. All checks for ESPs must reflect at least the state minimum wage for hours worked. The district should make up any difference between the actual amount of the check after insurance has been taken out and what the ESP would have received at the state private-sector minimum wage.

Health and Safety. ESPs continue to be victims of physical, verbal and emotional abuse and bullying in the workplace. In order to provide a safer environment in our schools, ESPs need adequate supplies, fully staffed programs, clear protocols, employer-provided trainings on OSHA rules, and whistleblower protections.

Job Security. Too many ESPs do not know if they will have a job from one year to the next. School districts need to eliminate this insecurity and commit to the importance of ESPs. ESPs need automatic renewal language, a 90-day probation period, and strong just cause provisions.

Recognition as Educators. ESPs deserve a strong voice in their schools, resources to access training outside of the district, relevant and meaningful professional development opportunities, and a role on every employee committee in every district.

Affordable Education to Strengthen Careers. The vast majority of ESPs earn less than $30,000 a year despite the fact that nearly 80 percent have college degrees. Many ESPs carry significant amounts of student debt or are helping family members pay off student debt. Many ESPs want more education but cannot afford to pay for it. ESPs deserve an affordable way of climbing the education career ladder — as well as a way of paying off career-related debt.

The MTA PreK-12 ESP Bill of Rights is available for download in English, Albanian, Portuguese and Spanish.

What is a Living Wage for ESPs?