When Naomi Akan, an applied behavior analysis tutor, learned that an assembly had been scheduled for March 22 at her elementary school in Canton, she thought it was related to an ongoing student activity.

So after taking a spot at the back of the cafeteria, she was startled when she heard her name called out by Principal David Brauninger, who then explained to more than 100 assembled guests and children at the Lt. Peter Hansen Elementary School that Akan was the newly named 2022 MTA Education Support Professional of the Year.

Akan looked stunned and moved to the front of the stage — passing students holding up hand-colored signs congratulating “Miss A” for her achievement— as her colleagues applauded. After a series of speakers congratulated her and cited her impact at the school, Akan spoke briefly, holding a bouquet of flowers and a large clutch of balloons.

“I want to say from the bottom of my heart I appreciate this, and I accept this honor in all humility,” she said.

Akan has worked for six years at the school, helping children as a one-on-one ABA tutor, often for several consecutive years. Several of her students attended the ceremony.

She is a member of the Canton Teachers Association and also serves on the MTA Board of Directors. In addition, Akan is an active member of two influential community organizations, Canton Families Embracing Diversity and the new Canton Diversity Equity and Inclusion Committee, which helps the public school district develop intentional and inclusive hiring practices.

Originally from Nigeria, Akan became a U.S. citizen in 2021, and her students attended a celebration for her at the school a year ago, one of the nomination letters for the MTA ESP honor noted.

“I want to say from the bottom of my heart I appreciate this, and I accept this honor in all humility,”

She started an African dance troupe at the school and has helped it organize Black History Month activities.

Among ESPs, she has been recognized for helping to promote the MTA PreK-12 ESP Bill of Rights.

MTA President Merrie Najimy told the students that Akan works to ensure fairness in the school. Among other efforts, Najimy said, “She works to make sure that every adult who is an educator is treated fairly.”

In an interview after the event, Akan encouraged fellow union members to take on leadership roles.

“Where you see a stumbling block, say to yourself, ‘That’s a steppingstone,’ and just keep going,” she said.

Akan, an applied behavior analysis tutor, works at the Lt. Peter Hansen Elementary School. She was named the MTA ESP of the Year and celebrated March 22 in a surprise ceremony. 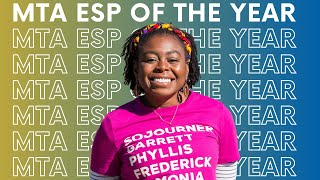 ESP of the Year works to ensure fairness for all

When Naomi Akan, an applied behavior analysis tutor, learned that an assembly had been scheduled for March 22 at her...

ESPs are fighting for a living wage

Education Support Professionals are pushing for real gains in salaries and benefits.

Massachusetts educators are teaching and working in preK-12 schools and college buildings that are cracked and crumbling due to a...