Members of the Dedham Education Association voted unanimously this afternoon to approve a contract agreement hammered out during marathon weekend bargaining sessions that began after educators went on strike.

After a tentative agreement was reached on Sunday, educators were back in their classrooms this morning.

“I have never been so proud to be a member of the DEA,” said DEA President Tim Dwyer. “We have not been able to meet with the superintendent or School Committee since Aug. 1. And then we had Friday.”

The vote by DEA members on Thursday to go on strike was practically unanimous. On Friday morning, hundreds of teachers, nurses and counselors in the affected bargaining unit were joined by fellow school employees and other allies on picket lines set up at every school.

Solidarity on Display in Dedham 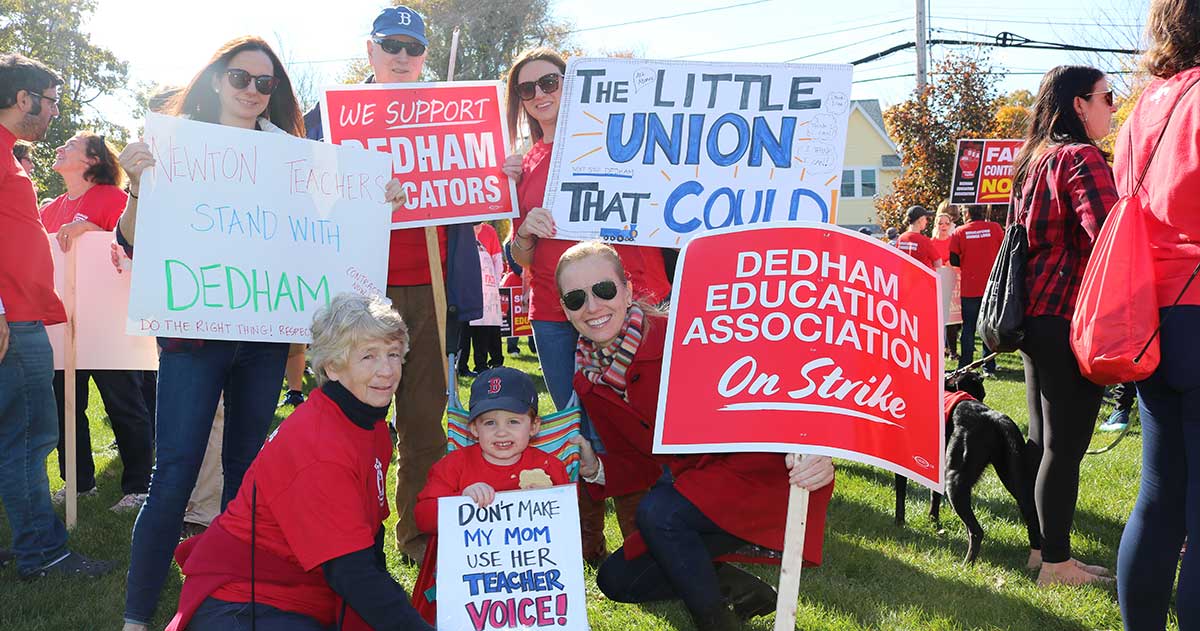 The DEA bargaining team held its first negotiating session in months with the School Committee and superintendent on Saturday after a spirited rally.

A large rally was held on Saturday, drawing educators, labor leaders and others from throughout the state.

While the strike — the first by educators in Massachusetts since 2007 — was against the law, the agreement waives further court proceedings by the parties in exchange for the payment of costs incurred as a result of the action, such as the expense of police details.

The contract contains strong non-retaliation language protecting all DEA members — including those in other bargaining units who honored the picket lines.

The agreement also bolsters sexual harassment policies and addresses student use of personal technology in the classroom. The financial package covers four years, including retroactivity for a year missed during protracted negotiations that began nearly two years ago.

“I don’t think there is better evidence that collective action and solidarity work,” said Dwyer.

Community backing for the educators during the strike was widespread, as supporters delivered soft drinks and snacks to those walking the picket lines.

After the settlement was reached, MTA President Merrie Najimy and MTA Vice President Max Page applauded the courage of the Dedham educators.

“They stood up for their students, their schools and their community,” Najimy and Page said in a statement. “While seeking a fair contract for themselves, they advanced the common good.”