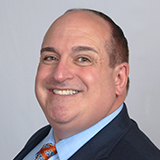 Erik J. Champy, a longtime advocate for students, educators and unions, was elected to a two-year term as vice president of the MTA in May 2016. He took office on July 15.

Champy has been an educator in the Triton Regional School District for more than two decades, most recently as a counselor at Triton Regional High School. In 2010, he was recognized as counselor of the year by the Northeast chapter of the Massachusetts School Counselors Association.

Champy holds a B.A. in elementary education and a master’s degree in school counseling, both from Salem State University, as well as a doctorate from Nova Southeastern University.

A member of the MTA for more than two decades, Champy served on the association’s Board of Directors for 12 years. He has been a member of several committees and task forces, including those overseeing public relations and organizing, candidate recommendations, human relations, LGBT issues, and the association’s Strategic Action Plan. He has been a delegate to the MTA Annual Meeting for many years.

In his district, Champy has been a member of teams and committees overseeing staff leadership, teacher assistance, professional standards and development, enrichment and curriculum review. He has served as a representative to the Triton Parent Teacher Association and has been a member of the Triton Regional Teachers Association’s Bargaining Committee, Negotiations Team and Executive Committee.

In addition, Champy was a member of the Board of Directors of the National Education Association for five years. He has been active within the NEA on Social Security fairness issues, empowering educators and the school-to-prison pipeline. He has been a delegate to the NEA Representative Assembly since 1997.

Champy is a past president of the Salem State University Alumni Association. For more than a decade, he has been a member of Friends of the School of Education. In 2008, he received the Exceptional Educator Award from the university chapter of Alpha Sigma Lambda.