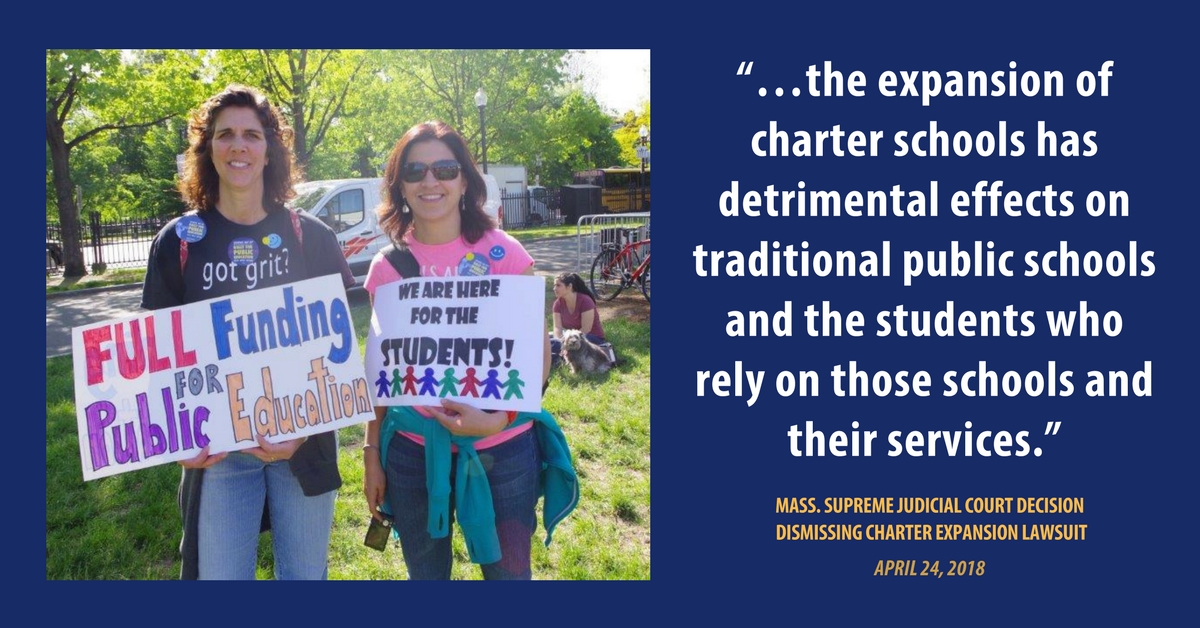 “This is the third leg of the charter expansionists’ strategy to be rejected,” Madeloni said. “They filed charter expansion bills, which have been rejected by the Legislature. They spent tens of millions of dollars backing Question 2, which was soundly rejected by the voters. And they filed this lawsuit, which has such weak claims that the SJC won’t even allow it to go to trial.”

"This is the third leg of the charter expansionists’ strategy to be rejected."

The court cited the Question 2 vote, stating that “a majority of voters, including those in the plaintiffs’ own school district, recently rejected a ballot measure that would have provided similar relief.” Question 2 was rejected 62 to 38 percent in 2016, even though supporters outspent opponents by nearly two to one.

The lawsuit, Jane Doe v. Secretary of Education, was filed in March 2015 by partners at three top law firms on behalf of five students in the Boston Public Schools who had submitted applications to one or more Commonwealth charter schools but had not secured a seat through the charter lottery system. The students had all subsequently enrolled in Boston schools that were designated Level 3 or Level 4, indicating that student performance in those schools was in the bottom fifth of all schools based on test scores.

The plaintiffs claimed that their constitutional right to an “adequate” education had been violated by their school assignments. The only remedy they proposed was to increase the number of Commonwealth charter schools.

The court rejected the plaintiffs’ arguments, finding that they had “failed to state a claim for relief” under either the equal protection clause or the education clause of the state Constitution.

"The cap is an effort to allocate education funding among all the Commonwealth's students attending these two types of publicly funded schools."

The court determined that the Legislature’s decision to limit the number of charter schools has a rational basis, noting, “The cap is an effort to allocate education funding among all the Commonwealth's students attending these two types of publicly funded schools.”

Further, the court found, “There are other legitimate public purposes that would provide a rational basis for the statute as well. For example, limits on charter schools may be based on a policy concern regarding the departure from local democratic control over public schools by local school committees because charter schools are instead governed by private boards of trustees.”

The MTA filed an amicus brief asking the court to dismiss the case.