Background on School Libraries in MA

The 1993 Massachusetts Education Reform Act of 1993 eliminated a state requirement for every public school to fund and maintain a library, which is reflected in the ongoing deterioration of the field here.

Nationally, between 2000 and 2016 we lost approximately 19% of our licensed teacher-librarians, with the majority of the cuts coming after the 2008 recession. Because the Massachusetts Department of Elementary and Secondary Education (DESE) does not collect and publish accurate data on school libraries, we don't have any reliable information on library access for all the public school students in the state.

However, they do collect information on staffing demographics for many different positions and do include "librarians/media center directors" in that category. While the data is self-reported by districts and may include unlicensed staff working in the role of a librarian/media center director, the MTA's Center for Policy and Practice (CEPP) found that, according to DESE's data there has been an even sharper drop of 24% of positions lost here in Massachusetts since 2008.

Although these cuts have occurred across all types of school districts, the cuts have been deeper in urban and rural lower-income communities and communities of color. In response to this inequitable situation, key advocates from the public and school library community and several legislators worked to pass legislation in 2013 that formed a legislative commission to study inequities in the access to school libraries and librarians, report on it, and make recommendations.

With the help of Carol Gordon, a researcher from Rutgers University, the Special Commission on School Library Services in Massachusetts gathered data from school libraries across the state, and in March 2018 the commission released its report on the findings, which confirmed that there was inequitable access to librarians and libraries between suburban districts and urban or rural districts, with the suburban districts having greater access and resources in most of the areas studied. For more information, visit Salem State University’s Massachusetts School Library Research Project website.

After the Commission's report was released, MTA members approved a new business item at the 2018 Annual Meeting in order to look more closely at licensed librarian staffing inequities in MTA locals, and to focus more specifically on inequities along racial, ethnic, and socioeconomic student demographics. A preliminary analysis conducted by the MTA Library Task Force found severe inequities in access to licensed librarians between the highest-median income Massachusetts cities and towns and the 26 Gateway Cities and Boston, where we find the highest numbers of low-income residents and students of color in the state. According to DESE’s 2017-18 data on school librarian staffing with additional verification, most of the schools in the highest income districts with a majority of white students have licensed librarians, while the lowest income districts with a majority of students of color do not. In addition, most of the highest-income districts also employ at least some education support professionals (ESPs), freeing up more instructional, collaborative, and administrative time for librarians. This table summarizes the findings of this investigation, and the charts below illustrate the gross inequities found here in Massachusetts. 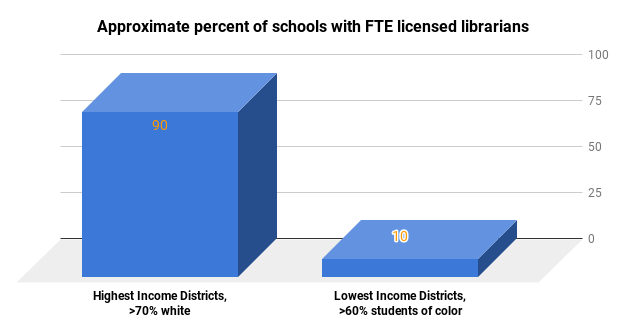 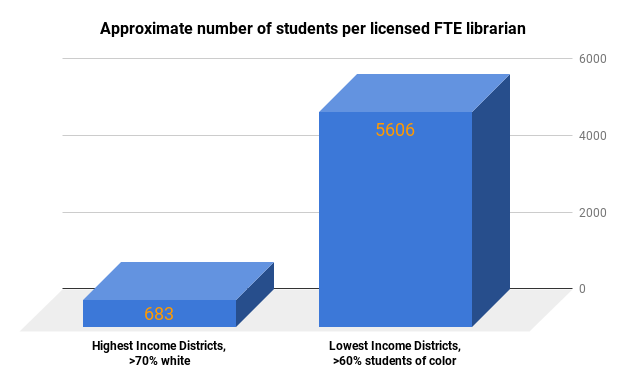 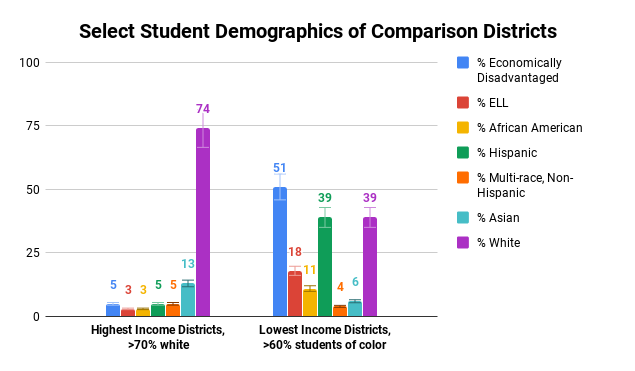 MTA's CEPP Division also compiled staffing data using DESE's website and looked at student access to full-time equivalent (FTE) librarians in relation to DESE accountability and income indicators. They found clear trends showing that students in schools with high levels of poverty and low accountability indicators had much less access to licensed librarian staffing than did students in schools with low levels of poverty and higher accountability indicators. Although we know the data is flawed, these trends support the findings in other data sets discussed here and elsewhere. See CEPP’s report on this data here.

More detailed information and a discussion of all the data that the Task Force collected and considered during the 2018-2019 school year can be found in this summary report of our findings.  A list of all datasets and data sources is included in the report.

Background on School Libraries in MA

Research on the Positive Impact of Librarians