What is the optional Retirement Program, or ORP?

In 1994, public higher education faculty and some staff were given the option of participating in the Optional Retirement Program, an alternative to the Massachusetts State Employees’ Retirement System. But many MTA members who initially opted to participate in the ORP became dissatisfied, and a grassroots movement to allow them to transfer to the MSERS began. In 2011, the Pension Reform Act was passed. As a result of efforts by MTA members, Section 60 of the act provides public higher education faculty and staff with a one-time opportunity to transfer from the ORP to the MSERS.

Who is eligible to participate?

MTA members in the following locals who were in the ORP as of October 5th 2013 were eligible to participate in S-60/ORP: 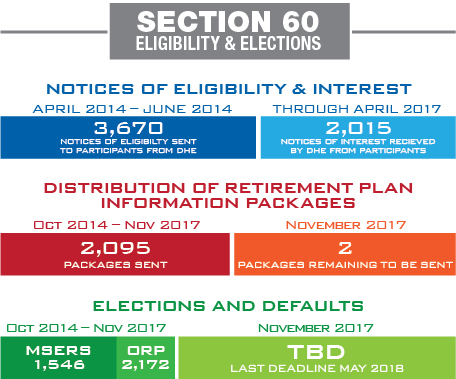 The procedure established for Eligible Participants to transfer their ORP participation to the MSERS is comprised of five successive steps:

Source: Board of Higher Education FAQ # 4

The Commonwealth notified each Eligible Participant of their opportunity to change plans on or before the Section 60 Effective Date.

After receipt of a participant’s Notice of Interest Form, the Massachusetts State Retirement Board (MSRB) provided a “Statement of Service” with the estimated amount of Qualifying Service and the estimated cost to purchase that service. Also included was a Plan Election Form.

Participants had to complete and return the Election Form to the DHE within 180 calendar days of the date the Retirement Plan Information Package was mailed. The Election Form recorded their choice of plans: ORP or MSERS.

The DHE began the transfer of ORP assets to the State Retirement Board (“MSRB”) on behalf of participants' electing to change their retirement plan coverage to the MSERS.The process is continuing. For those who have ORP assets in a TIAA Traditional account, the transfer process is likely to be open until they leave their state employment.

The MTA has met with the Board of Higher Education and MSERS officials to discuss implementation progress and issues. Updates are posted after each of these meetings.

Help and Information for MTA Members

The S-60/ORP application and decision process for MTA members is complicated but important. Members considering whether to transfer from the ORP into the MSERS will need to understand the process and the cost of doing so in light of their personal circumstances. Ultimately, this is a decision that needs to be made by each individual.

Links to information that may be of assistance to members is listed below.

Original Legislation Establishing the ORP — Chapter 495 of the Acts and Resolves of 1993, Which Added Section 40 to the Laws Governing the Board of Higher Education.