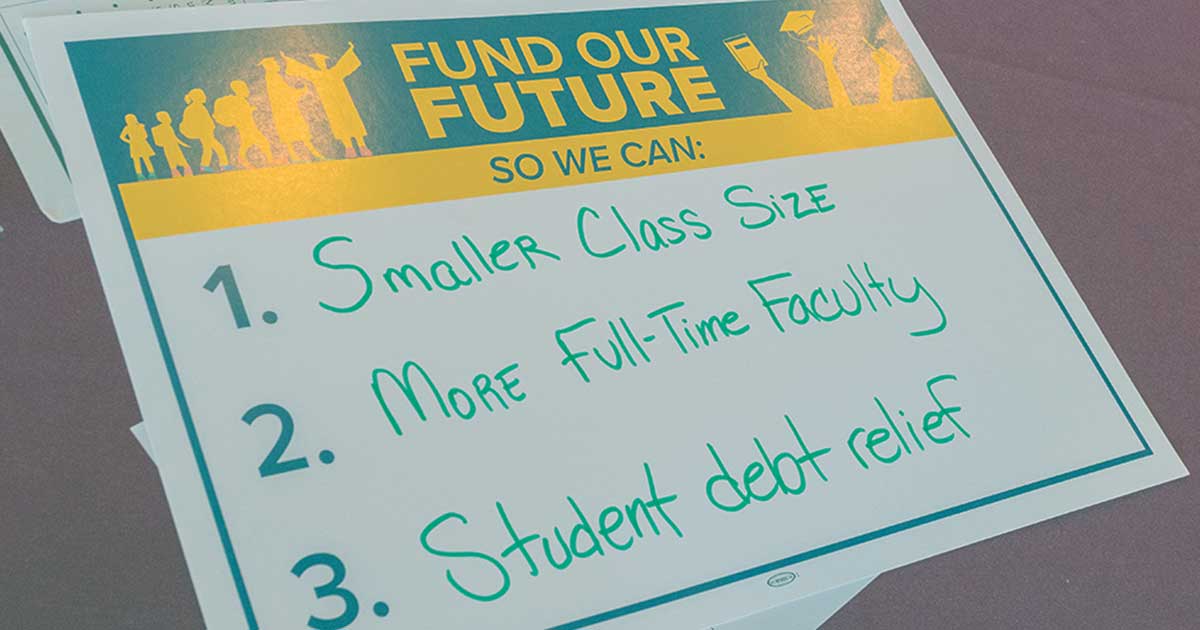 State funding for our community colleges, state universities and the UMass system has declined by nearly one-third since 2001, which has led to:

Exploitative use of part-time staff, adjuncts and non-tenure-track faculty who are underpaid and lack health insurance, benefits and job security

Increasing amounts of costly building and infrastructure repairs, outdated technology, administrative bloat, and money spent on capital debt service rather than on students, staff and programs

The impacts of this chronic underfunding are keenly felt by both our students and our dedicated faculty and staff. The Cherish Act, filed by Sen. Jo Comerford (D-Northampton) and Reps. Sean Garballey (D-Arlington) and Paul Mark (D-Peru), would reaffirm the state’s commitment to public higher education by:

Implementing the core finding of the 2014 Higher Education Finance Commission, resulting in more than $500 million in additional funding for public higher education. These new funds must supplement — not supplant — existing funding.

Establishing in statute a fair and adequate minimum funding level for public higher education at no less than the FY01 per-student funding level, adjusted for inflation.

Freezing tuition and fees for five years, as long as the Legislature appropriates the funds required to reach FY01 per-student funding levels in five years.

Are you currently taking courses at a public college or university?

Then the odds are great that you are being taught by a poorly paid adjunct who has no obligation — or time — to meet with you outside of class. Or perhaps the building where your classes take place is in desperate need of repair and updated technology.

Do you work at a public college or university?

Workloads have grown unmanageable for staff at many public campuses. Benefits are spread inequitably across our campuses, and parking fees for some employees have become burdensome salary takeaways. All higher ed locals will be in bargaining this year, with workload and funding issues central to negotiations.

MTA members face the same challenges that all working families do, and right now the ability to pay for college is one of the top concerns identified in a survey of all members, both preK-12 and higher ed.

Do you work with high school students seeking admission to a public college or university?

Our students need a high-quality public option in their pursuit of higher education. They need access to scholarships and a pathway to a debt-free future. Our public higher education graduates tend to  stay in the state, with many becoming educators in our preK-12 schools.